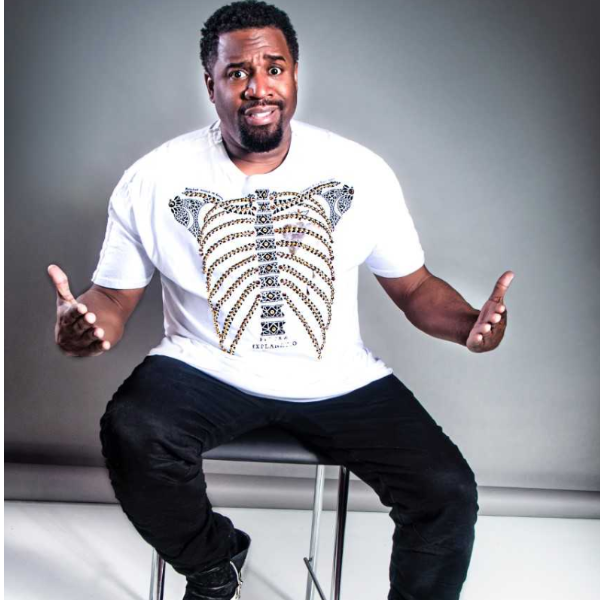 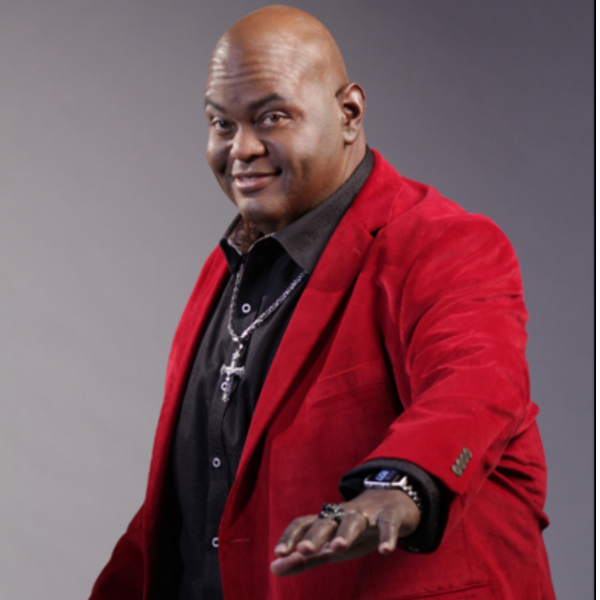 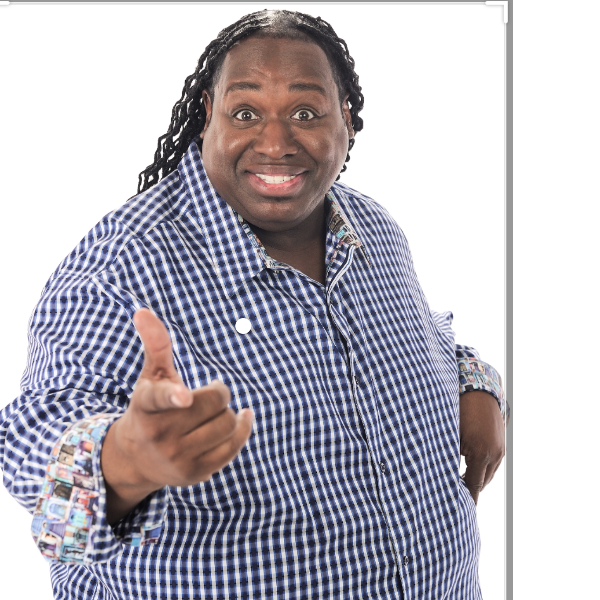 Going from hanging in the hood to performing comedy on Jay Leno’s “Tonight Show,” not to mention the privilege of afterward being invited to take a seat on the “couch” which not many comics are asked to do, has been a long and fulfilling journey. Corey hit his first open mic in 1992 when Adele Givens called him to the stage. He was a smashing success and has been a full-time comedian ever since. He has taken top honors at the Miller Genuine Draft Comedy Search, Budweiser Comedy Competition, Chicago Home Jam, and Laffapalooza. He has appeared at the Montreal Just for Laughs Festival and the Chicago Comedy Festival. Corey’s comedy genius transcends class and racial divides. If you understand English, Corey’s humor will tickle your funny bone. People all over the world can relate to the drama of trying to make a relationship work. According to Corey, a “hunter” (man) being captured by his “prey” (woman) makes for the best comedy ever. Corey offers plenty of advice on how men who have been the victim of a “hostile takeover” by the female in the relationship can take back control. You can believe there is no counselor on the planet who offers the kind of relationship advice and remedies Corey dispenses from the stage. Corey Holcomb’s comedy set is both an auditory and visual experience. His facial gestures alone can make an audience burst with laughter. “I spend a lot of time practicing my stage faces because I need to be able to convey care and concern while I criticize.” Although Corey has a long and diverse resume of successes, he remains humble and approachable. Corey’s film and television credits include independent film “Who’s Watching The Kids,” MTV2’s “Wild ‘N Out,” MTV’s “Wild ‘N Out,” NBC’s “Last Comic Standing,” 20th Century Fox’s “Like Mike,” a recurring role on UPN’s “Half & Half,” NBC’s “The Tonight Show,” BET’s “Comic View,” Fox’s “Mad TV,” Comedy Central’s “Premium Blend,” HBO’s “Def Comedy Jam,” “It’s Showtime at the Apollo,” Showtime’s “Shaq’s All Star Comedy Jam,” Tyler Perry’s “House of Pain,” TV Ones “Rickey Smiley Show,” and plays recurring character Robert Tubbs on Fox’s “The Cleveland Show”! He has appeared in three comedy specials of his own, Corey Holcomb: “The Problem Is You,” Comedy Central Presents: “Corey Holcomb,” and Corey Holcomb: “Your Way Ain’t Working.” Corey was a regular personality on Jamie Foxx’s satellite radio channel The Foxxhole from 2007 to 2011. He currently hosts his own internet radio program, The Corey Holcomb 5150 Show, which began on satellite on The Foxxhole but later moved to CoreyHolcomb.com Corey is currently bringing funny to the big screen with his roles in the movies “Think Like A Man Too,” “Wedding Ringer” and Adult Swim’s TV series “Black Jesus.”

Comedian, Lavell Crawford is quickly climbing the comedic ranks and becoming one of the hottest stars in the biz today. He filmed a new one-hour special in his home town of St. Louis, “Can A Brother Get Some Love?,” and is on DVD from Entertainment One. In addition, he filmed an episode of “Workaholics” for Comedy Central and he’s been casted in a recurring role on the AMC’s Emmy Award-winning “Breaking Bad.” If that’s not enough, he was also seen as a regular panelist on E! Entertainment’s “Chelsea Lately” and a regular on “Lopez Tonight,” performing in various comedy sketches on the show. From his numerous television appearances and as one of the hottest touring acts in the country, audiences are becoming increasingly familiar with Lavell’s giant-sized talent. Lavell gained huge national exposure on NBC’s hit reality series “Last Comic Standing.” Not only did NBC take notice, promptly signing Lavell to a holding deal with the network, but also Comedy Central, offering him his own half-hour standup special, “Comedy Central Presents: Lavell Crawford." Lavell’s stand-out work includes appearances on "Shaquille O'Neal Presents: All Star Comedy Jam" which premiered on Showtime in December, “Russell Simmons’ Def Comedy Jam” on HBO, “Showtime at the Apollo,” “Martin Lawrence Presents 1st Amendment,” “Comic’s Unleashed with Byron Allen,” “Steve Harvey’s Big Time” “Comedy Central’s Premium Blend,” “Motown Live” and “BET’s Comic View.” In addition, Lavell has appeared in the films “Baby’s Mama Drama,” “Beverlyhood,” “Ghetto South Problems,” and on the televised series “The Jamie Foxx Show.” On stage, he played Ben in the hit play “Men Cry in the Dark,” based on the Michael Baisden best seller. Lavell also recently appeared on stage with the critically acclaimed production “Friends and Lovers,” a stage production based on the novel by author Eric Jerome Dickey where he played the scene-stealing Bobby. The play also featured notable actors such as Miguel Nunez (“Juwana Man”), Leon (“The Five Heartbeats”), Monica Calhoun (“The Best Man”), Mel Jackson (“Soul Food”) and Maia Campbell (“In the House”). Endeared by audiences far and wide, Lavell has built a very strong fan base playing theatres, comedy clubs and colleges across the nation in addition to festivals including HBO's US Comedy Arts Festival, The Comedy Festival and LAFFAPALOOZA, America's longest-running annual urban comedy festival.

Bruce Bruce is a name synonymous with keeping audiences rolling with laughter thanks to his captivating improv skills and larger than life comedic style. Bruce’s steady style of comedy has been showcased across the country, and he has been entertaining audiences young and old, and of all backgrounds, for years. His wit, spontaneity and dazzling personality set him apart from other standup comedians. Although Bruce is known for his adult comedy, he prides himself on not using vulgarity to win a laugh, and is no stranger in winning over new audiences with every appearance he makes. From his role as host for two seasons of BET’s “Comic View” to his many appearances on tv and film, Bruce is clearly a comedian that has found his mark in the business. Bruce headlined the 2008 Just for Laughs Comedy Festival in Montreal, leaving the audiences north of the border in stitches. On the feature film front, Bruce made a cameo in the HBO Films feature “Idlewild,” appeared in the Larry the Cable Guy-starrer “Larry the Cable Guy: Health Inspector,” with Ice Cube in Columbia Pictures’ “XXX: State of the Union” and in the Screen Gems comedy “Think Like a Man,” Paramount’s, Chris Rock directed, “Top Five.” He most recently appeared in two big screen comedies, "The Trap," starring Mike Epps, Universal Picture's, "Undercover Brother 2," and you can catch Bruce starring with Loretta Devine in the Netflix "Family Reunion" comedy series. Bruce is one of the nation’s favorite standup comedians and can currently be seen on two national tours, "LIT AF Tour" with Martin Lawrence, and "The Real Mike Epps Tour" in selected clubs and theaters. In addition to standup comedy, film and tv, Bruce Bruce can also add author to his list of credits. Bruce released his first book “Baby James Brown” from Penguin Publishing. Within these pages you will find hilarious stories from his childhood and learn more about what makes Bruce Bruce one of the most popular comedians in the business today. Bruce’s comedy can actually be traced back to when he was working as a chef directly out of high school. He would entertain his customers with his humor while cooking up mean BBQ dishes. Bruce also worked as a Frito-Lays salesman and did everything from shelf placement to performing his comedy sets during their corporate meetings. Eventually, Bruce brought his comedy routine to the Comedy Act Theater in Atlanta and was an instant hit. When BET’s Coast to Coast came to town searching for new and talented stand-up comedians, Bruce would pursue the opportunity to appear on the show and would incessantly audition at each club in the area. Ultimately, he appeared on the show three times. In 1993, Bruce made his first appearance on HBO’s Def Comedy Jam; followed quickly by an impressive appearance on the Showtime at the Apollo hosted by Steve Harvey in 1994. Bruce was asked back to the Apollo two more times in 1995. His career skyrocketed from there. After receiving the highest ratings ever as the Host of “BET’s 10th Anniversary Comic View” for two seasons, Bruce returned to the BET family as the two-time host “Coming to the Stage.” Bruce went on to star in his own “Comedy Central Presents” special which he followed with a release of his one-hour comedy special DVD “Bruce Bruce Live”(2003) and more recently on “Losin’ It” (Showtime 2011). On the big screen, Bruce has created crazy characters like the “Lime Pimp” in Hair Show starring Mo ‘Nique, and “Dewayne” the lovable security guard in The Wash starring Snoop Dog and Dr Dre. He also appeared in Larry the Cable Guy: Health Inspector, XXX: State of the Union hilarious "Maitre D" in the Mike Epp's The Trap and as the memorable “Golf Ball Eddie” in Who’s Your Caddy. On the small screen, Bruce recently turned a small role as "Brother Davis" into a hilarious foil for Loretta Devine's character in "Family Reunion." Bruce’s bigger than life personality has transcended his personality onto the music video scene as well. He has made guest appearances in videos with Ludacris and the Ying Yang Twins (after being named in their hit song “Salt Shaker”). He appeared in the monstrous 1996 summer hit “Come On Ride the Train (Ride It)” by Quad City DJs and can also be seen in Outkast’s music video “So Fresh, So Clean.” Most recently, Bruce appears with Anthony Anderson in the KEM music video, “You’re On My Mind.” Bruce’s memorable festival appearances include the prestigious, Just For Laughs Comedy Festival in both Chicago (2009) and Montreal (2000 /2003/2008), Laffapalooza in Atlanta, GA (1999-2002) and the US Comedy Arts Festival in Aspen (2002). You can currently find Bruce guest-starring on the Netflix Original comedy series "Family Reunion," with Loretta Devine (2020), Syfy’s “Superstition,” “Showtime at the Apollo (2018),” his recent DVD release, “Losin’ It: Live from Boston,” “Shaquille O’Neal’s Comedy All Stars” (Showtime 2018) and in constant reruns of “Comic View” on BET. When not performing in comedy clubs across the country, Bruce spends his time at home with his extended family in Atlanta. He is also extremely dedicated to his incredible car collection, which includes two Harley Davidson trucks and four Buick muscle cars, among others.